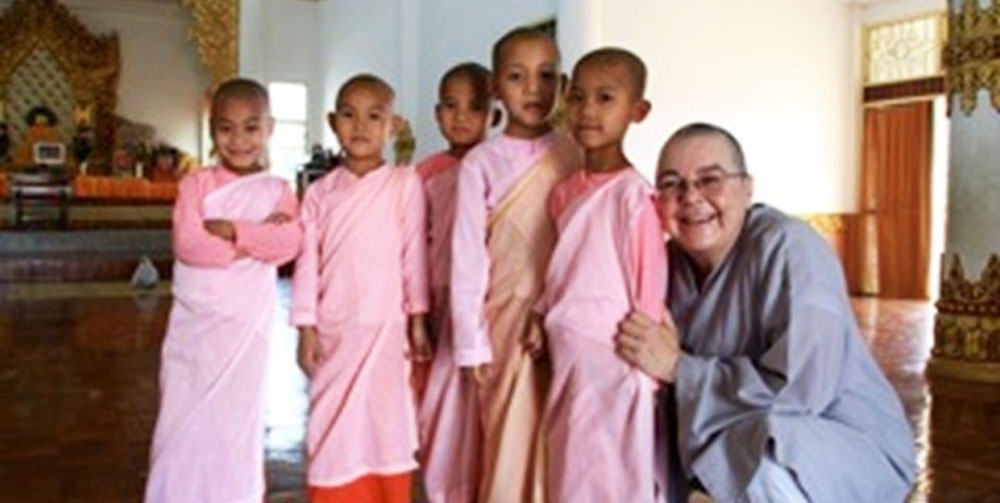 Hello. That’s me with some of the cute young nuns in Myanmar. (Of course, they ordain for as long as they like and can leave at any time.) My name is Mujin. In the Korean ordination system (I am an ordained Korean bhikkhuni -- nun) we are called Sunim; it is the title so actually, I am called Mujin Sunim. Then in formal occasions, because people end up calling me Mrs. Mujin Sunim (!), we usually put Venerable in front, as a title. So Iend up as Venerable Mujin Sunim; most people call me “mujin.”

So once again, hello! “Where do I come from?” you ask. Well, that is a long story which has recently been simplified by my becoming Swiss from the village of Moiry in Vaud. But otherwise I have lived all over the world and spent most of my adult life in Asia. After studying psychology and education under (my only claim to fame) Professor Jean Piaget, i slowly made my way to India, Singapore and Sri Lanka.

As a young child I had already longed to go to India. Then in the 60s, when Buddhism was a buzz word, I bought books (and still have them) but knew that was not the way to learn and that a living presence was necessary. So finally, in my early 20s I set off and didn’t return for 10 years.

In Singapore I taught school and then discovered monks who could teach me. As my periods of instruction and practice increased, my enthusiasm did too and so in 1976 I set off for Sri Lanka because someone said, “Why don’t you ordain as a Buddhist nun?”

And so off to meet Ven. Balangoda Ananda Maitreya Maha Nayaka Theron who became my first teacher in Udumulla in Sri Lanka. After three years with him, studying and practicing, I set off and spent 5 years studying (and practicing ) in India and then returned to Sri Lanka.

With study, I found that my heart and mind (they are the same in Buddhism) took flight every time I read the Zen texts and teachings and so slowly the wish to go to China grew. Then with my teacher’s blessings, because China was too restricted, I set off for Korea as a halfway point and there I stayed for the next 14 years.

It is the Buddhist custom that when we change Buddhist schools (Theravada in Sri Lanka, Mahayana Son (the Korean word for Zen)) in Korea, then we also receive a new ordination and a new teacher. I was accepted by Ven. Inhong Sunim of Soknam-sa near Ulsan and so took the second ordination under her in 1985. During the two years I lived in my temple, the learning of Korean became necessary and so I would go to Seoul. There it became evident that quite a lot of people were interested in Buddhism and so Lotus Lantern International Buddhist Center was born in 1987. After all I had lived and been supported by Buddhism for 12 years of my life; it was time to give something back.

We worked hard. The program was extensive but the response very good. At times, during ordinary weeks (without special events) about 400 people a week going through the center!

Then in 1998 I returned to Switzerland to care for my parents. As my mother was in and out of hospital for a long time, slowly Koreans collected and when my mother died and I presumed to return to Korea, they said “But there are so many Sunims in Korea, please stay here.” And so, I did and Popkye-sa / Dharma Realm was opened in 2005. 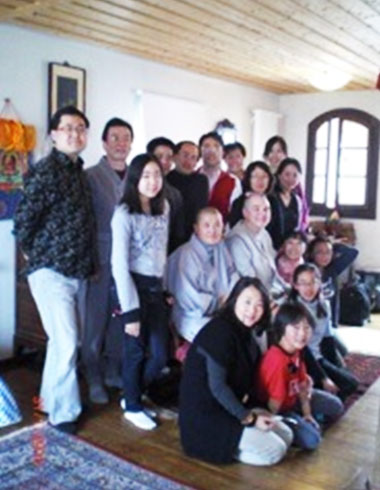 Popkye-sa was first located in a very peaceful and relaxing small house. In 2014, allergies and preparing for old age inspired me to move to Morges where I was lucky enough to find an apartment which fulfilled all our (the group) and my needs. Our monthly meetings are still, and always have been, aimed at joy and camaraderie.

In 2000, my uncle, Dr. Douglas A. Campbell, was diagnosed with dementia and I was called to take charge of his affairs in Los Angeles. It was an arduous task as I knew nothing of the job and particularly of how things are done in the USA. So, there began a long process of learning how to cope with a difficult situation with lawyers and case workers and doctors and staff in his house. As is often the custom in the US, people create foundations. Douglas had created his long ago but it was only semi-active with very little money in it; I had to look after that, too.

The next hurdle was finding another officer to work with me (as Douglas had to resign with the diagnosis) on the foundation and so I invited my good friend Douglas T. Lilley to join me. He was specialized in financial planning and had a lot of experience with different companies and organizations. Then in 2009, we began thinking that we needed a medical person and so we invited Dr. Celine Meyer (someone I have known all her life) to join us. She is a young GP who is open minded and works with her heart. The committee was thus set and we worked wonderfully well together. One of our main aims is to get Douglas’ foundation name put on everything we do is in his memory and we are proud to do our little bit for the world.

Disastrously, Douglas T. Lilley died in 2015 and we lost a good friend. We felt it important to find a new officer and were lucky enough to have his brother, Jeffrey B. Lilley accept to work with us. And so, Jeff became our new Secretary.

Today the foundation is a major part of my life as I must travel to visit the projects and also do the paperwork behind the scenes. My wonderful helpers also need a visit most years in Los Angeles. The oldest member -- in terms of time served -- is the investor who has looked after Douglas’ money since forever. He has managed to keep the foundation well up even in these rocky times. Then there is our trusty accountant who is more of my conscience as he keeps me on the straight and very very narrow. After that came our dependable and dedicated attorney. To date we do projects mostly through friends. But the research continues to define a Good Project. (any ideas how to define a Good Project, please send them in.) The main problem is always who is going to oversee the job in the country, to make sure it is well done.

The rest of my life today is dedicated to continuing my practice, doing a little teaching and writing. In the website you will find the narratives of my visits to the projects and my experiences in those places in the Newsletters. Reading them and looking at the pictures, you travel with me and, though you don’t get a direct view, i promise you will see a lot!

So enjoy! Interesting Stuff will be added to every now and again and otherwise I look forward to hearing your comments and ideas at any time. 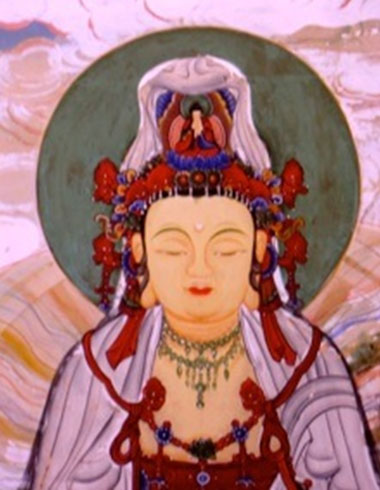 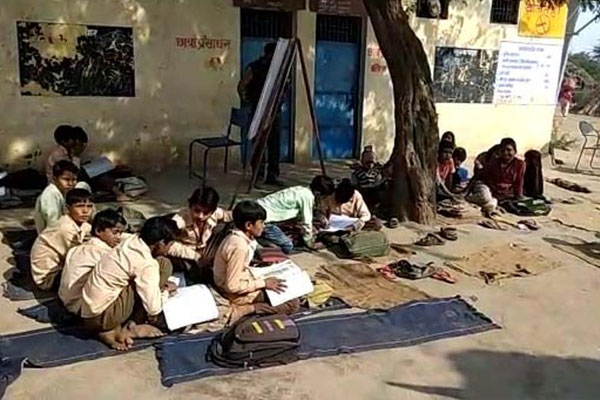 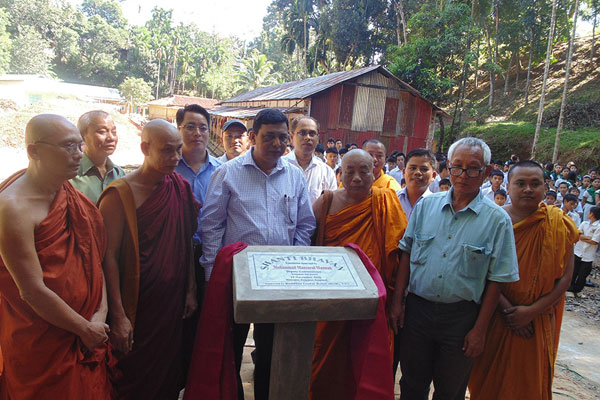 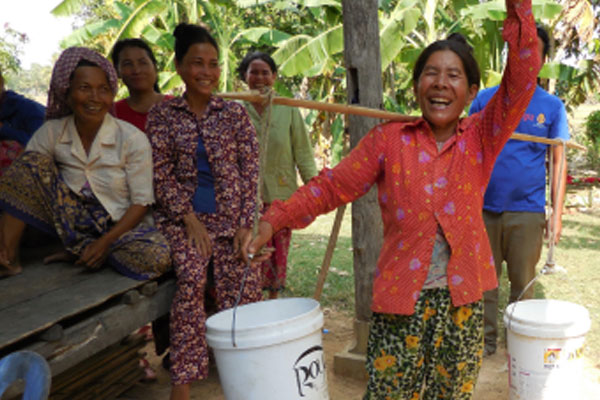